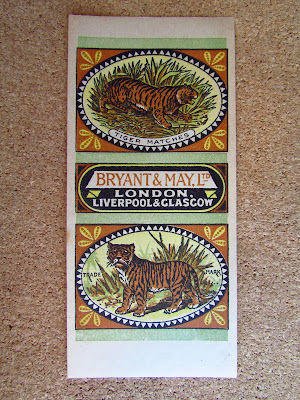 Match-making was a particularly dangerous job in the 1800s. Workers – mainly women – employed by companies such as Bryant & May to make matches commonly experienced a condition known as phossy jaw. This was caused by poisoning from the yellow phosphorous used in the head of the match. Phossy jaw was a terribly disfiguring and sometimes fatal condition. Eventually, a combination of this health danger, poor pay and long hours led to the formation of a trade union for the workers. The Match Girls Strike of 1888, led by social activist Annie Besant (1847-1933), was a landmark industrial action and led to better pay. In 1901, Bryant & May finally stopped using yellow phosphorous in their matches.

All right reserved to 'Brought to Life', a website provided by the Science Museum, London

Email ThisBlogThis!Share to TwitterShare to FacebookShare to Pinterest
Labels: ARTB - Around the box labels, Bryant and May London, Flaming Fusees, Tiger, United Kingdom