Another story of a matchboxes collector who has more than 300,000 boxes

Unusual hobby proves to be a perfect match 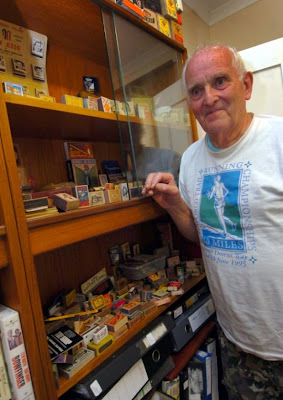 No, he’s not talking about smoking nor any other habit, but about his unusual hobby of collecting matchboxes.
And it’s not just a passing interest, the former Hastings councillor takes it seriously and spends many an hour sorting and sifting through his prized collection, amassed since he was a boy.
Mr Griffin, who has never smoked a cigarette in his life, first started collecting matchbox labels in 1950.
His off-beat hobby started while he was walking to school to St Joseph’s College, in St Helens Park Road, which no longer exists.
“I saw a couple of labels lying in the gutter and decided to pick them up,” he said..
Mr Griffin’s new-found interest snowballed and soon he already had quite a sizeable collection.
He said: “Every Sunday I went to the coach park in Rock-a-Nore after the coaches went because there were loads of matchbox labels left on the ground by visitors.
“The coach park attendant would keep the matchboxes for me to collect.”
Mr Griffin joined the British Matchbox Label and Booklet Society in 1964, which now boasts 450 members from across the UK.
He has been a member since and was the society’s president for six years, as well as its secretary for 10.
A lot of Mr Griffin’s matchboxes have come from auctions and collectors from all over the country and overseas.
The veteran athlete, who has run 18 half-marathons in his time, is holding his own exhibition in Northwich, Cheshire, in September.
He and his fellow society members meet each month to exchange matchbox memorabilia.
The oldest one the pensioner has – and he was unable to dig it out when the Observer paid a visit to his Githa Road home on Tuesday – is a matchbox dating back to 1845 and made by John Walker.
“He was the inventor of matchboxes,” Mr Griffin said, “I bought it in London back in 1970 for 10 shillings.”
Fortunately the Observer was able to see numerous matchboxes and booklets from far and wide, all neatly stacked in display cabinets.
Examples include ones from Hastings pubs that no longer exist, such as Heneky’s, a box from Croatia, made at the turn of the last century when it was still part of the Austro-Hungarian Empire, and ones from now defunct ferry companies and ports from across the UK.
Others come from past holidays to destinations such as Las Vegas and Spain.
“I have got 200 albums altogether,” Mr Griffin said, “but it could be more.”
The pensioner, who served as a borough councillor in Hastings from 1980 to 1984 and used to be a Special Constable for 30 years, is in the midst of trying to turn one of the rooms in his house into a museum devoted to the history of matchboxes and their labels.
But he has a massive task ahead of him, as he has collected around 300,000 matchboxes, match booklets and pill boxes (cylinder-shaped match containers), since 1950.
He said: “Any boxes which still contain the matches are worth more so I never throw them away.”
But Mr Griffin’s interest is a dying hobby.
“There is little coming out from this country now, as all of the factories here have closed. Matches are mainly made in Australia, Sweden and India now. It’s hard finding anything new, except in exhibitions,” he said.