Bill's matchboxes - A collector of READHEADS

A nice story from the website: Museum Victoria
Photographer David Paul sent me some proof sheets of several hundred Redheads matchbox lids that he photographed recently as part of the ongoing documentation of the museum's objects. They were collected during the 1950s-1970s by Bill Boyd and form part of the William Boyd Childhood Collection, which includes most of the Bill's childhood possessions. Bill was an avid collector, and fortunately for us, his mother Lillian kept his collections long after Bill had grown up.
Like David, I think the illustrations on the matchboxes are beautiful and fascinating snapshots of the time. There are several sets – marine creatures, native animals, famous explorers, Queensland's centenary (1959), history of transport and flags of the world, mythology and more. Redheads are now made in Sweden but back then were made by Bryant and May (or Brymay). Brymay was an English company that began manufacturing locally in 1909 in a factory in Cremorne, Richmond. 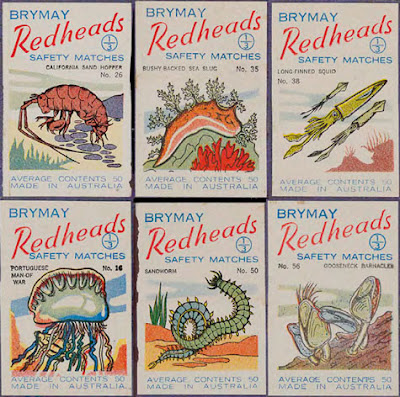 Special packaging, swapcards and bonus toys are a marketing idea that has proved successful for years. Pester power is nothing new: children badger their parents to buy a certain brand of tea, breakfast cereal or matches so that they can complete the set. In the pre-war mania of cigarette card collecting, there are stories of kids who would wait outside shops and pounce on emerging adults to beg for the cards from their newly-purchased pack of smokes.
Bill Boyd's matchboxes started me thinking about the nature of childrens' collections. Lots of kids collect things – stamps, coins, swapcards – but why?  I know a family where each child was charged with nominating something to collect so they'd have something to keep themselves amused on road trips. Another colleague collected stamps and reckons his mother introduced him to the hobby so he'd learn about geography and organisation. And why do some people continue their collections while others abandon them? I collect entirely different things now than I did as a kid, but that probably reflects financial independence. 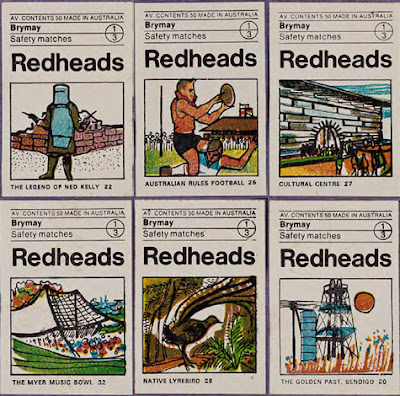 I wonder how Bill got so many matchboxes? Perhaps he swapped them at school or family friends saved them for him. I imagine he didn't have much money to buy what he wanted and matchboxes were free and readily available. When smoking was more popular and before the invention of disposable cigarette lighters, there were probably matches in every pocket.
For Bill, perhaps they were important because they were objects that no one else controlled – no one else chose them on his behalf, or could tell him how to arrange or store or preserve them. These sorts of things are very important when you're a powerless kid and grown-ups dictate almost everything about your world.
What did you collect when you were a kid? How did your collection start? Do you still have it? Perhaps you'd like to upload it to Collectish?
Posted by Arnon Reisman at Saturday, November 19, 2011