A story of Australian collector who collected
Australian Bryant & May Safety Matches labels
(mainly REDHEADS) in the 60's:

These Bryant and May Safety Match labels were collected at a time when I had to walk a couple of miles each day to primary school in the sixties and slightly beyond.  In those days it was socially acceptable to smoke, spit and litter when and where it was convenient. So I picked up the lot of discarded match boxes along the way.  The boxes were soaked in water for about a day to release the glue. The labels are extremely thin and fragile and are now "conserved" by PVA gluing to heavy bond paper.  Most of the labels were the generic red headed lady, who looked suspiciously like a teacher that we feared and loathed. The red head still looks slightly demonic to me ! About one in ten boxes would have a collectors label.

I have recently received some correspondence from a person who actually worked at the Bryant and May factory in Melbourne which explained the mystery one over three symbol means. The 1/3  one over three symbol means that one third of the revenue received was excise levied by the government.  There was a sealed mechanical counter on an assembly line where boxes of one gross (144) were packed and counted just before dispatch.
http://users.monash.edu.au/~ralphk/matches.html 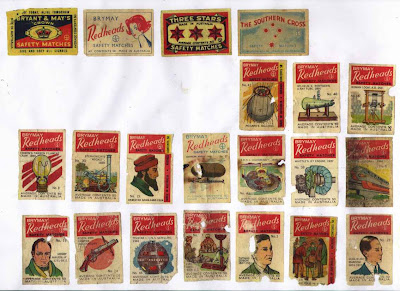 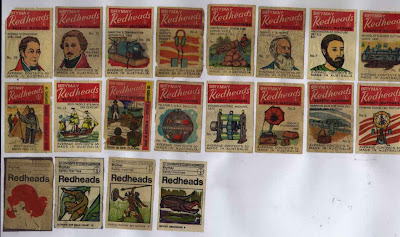 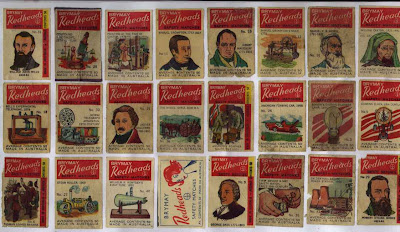